With a heavy heart, we sadly announce the death of Alaa Adib Abou Fakher, at the age of 38. Alaa was born in 1981 and lived in Choueifat, Mount Lebanon Governorate, Lebanon. He was shot and killed in Khaldeh, Lebanon on November 12, 2019, as he was peacefully protesting against the corruption and injustice suffered by the Lebanese people for decades.

Alaa was an administration manager in a company called Middle East Power. He was known by many as a vibrant, loving and energetic person, and did his best to provide a better future for his children. He had a dream of a better Lebanon; yet, he knew that building a country requires great sacrifice.

Alaa fought for a collective vision shared by all Lebanese: a Lebanon free of corruption and injustice. He joined the peaceful protesters on the streets of Khaldeh on this fateful day in November. But it would turn out to be his last march.

The death of Alaa Abou Fakher angered Lebanese protesters whose determination has only increased. After his death, he became an inspiration to millions and was hailed a hero of the October 17 Revolution. Many parts of Lebanon paid tribute to the fallen hero by prayers, vigils, and artwork.

Alaa was loved and cherished by many; and now his memory will aid others for decades to come. He is survived by his wife Lara Fayez, and his children Ghina, Omar, and Adib.

From Druze Times, we salute you Mr. Alaa Abou Fakher! We proudly wear your name as a badge of honor, and continue your work.

Bader Shehayeb has a passion for poetry and creative writing. She holds a masters degree in special education, and consults on communication skills and relationships. Bader currently resides in Lebanon where she writes online in both English and Arabic languages.
Previous Lebanese News in Plain English 11/13/19
Next Lebanese News in Plain English 11/14/19 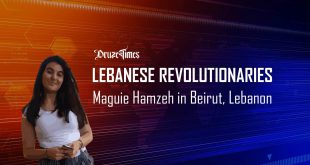 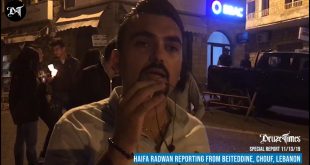